The Newtown shooting, a national tragedy, is the stuff of nightmares for anyone but especially for parents with young children. We send our children off to school every day because that's what expected of us, and we hope that, in return, they learn to be productive members of society. It didn't take the media long, of course, to blame video games for the violence. Of course it was video games!!

Let me share with you our own experiences with video game induced violence. We had a beautiful day of snow over Winter Break. On the first day, we just played. On the second day, we went sledding. It was amazing! We loved zipping down the perfect hill and crashing into various things. We vowed to do it again the next day as the sun went down. On the third day of snow, the temperature went above freezing, and the sledding on slush does not produce the same epic results as sledding on soft powder.

Both my little girls and I play video games, so of course, we resorted to violence. EPIC VIOLENCE. We invaded my parents' backyard with an army. Our anger had to go somewhere, right? 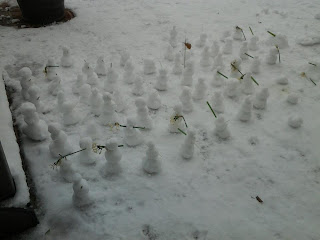 That's right. We built an army, and we made sure that they were armed with dangerous weapons a la Plants vs. Zombies. I'm telling you that our hours of playing PvZ drove us our great rage to new extremes. How dare the snow melt before we were ready?! We had to strike back at the world. 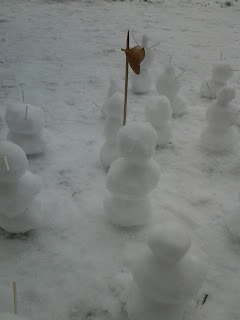 Our army moved relentlessly towards the stairs. They brought fear with them. This particular guy was totally inspired by hours of killing gems in a most brutal manner in Bejeweled and aggressively creating cakes in My Little Pony: Pinkie Pie's Party Parade. My girls have been inundated at a young age with this kind of stuff.   It's no wonder they're acting out with this army.

The coup de grace is our headless snowman. It's all the Pokemon games we've been playing. I don't think it could possibly have anything to do with their curiosity about the guillotines used in the French Revolution as I was telling them the story of the Scarlet Pimpernel and discussing Les Miserable with them. That's classic literature, so seriously, it's either Pokemon or Spore that must be to blame. I haven't decided which yet, so we'll just say it was both. 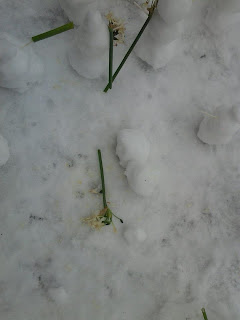 Despite the fact that my ten-year-old spent the whole time talking about how this was just like Calvin and Hobbes the entire time we were building our snow army, I'm convinced that it was video games that inspired such violence in them. I should say that my mother is a culprit, too, since she provided the flowers that were used as "guns". I'm pretty sure that their reference to plasma rays must have come from overhearing something from Mass Effect and probably has nothing to do with Stitch shooting up Lilo's house from Disney's Lilo and Stitch.

And ultimately, I would like to remind everyone that this violence must be the fault of video games, and of course, I can't be held responsible, being their mother and all. After all, it's really not my responsibility to take them outside, to play with them, to engage them in new ideas and introduce them to art in all its forms. It's really just those darn video games.
Posted by Pang at 2:39 PM 1 comment: